In the original design of my Proxmox box I opted for running the docker containers straight on the host. For a lot of reasons, this is actually a Bad IdeaTM, and it’s been one of my goals to migrate these to a VM at some point.

One of the bonusses of running native on the host is that I/O is really good. 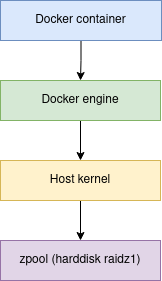 Moving those over to a VM is fairly easy: you take your /var/lib/docker directory, copy this over to a VM, set up docker and spawn off all your containers. You’ll also have to make sure that whatever sources you need that were on the host (directories) are mounted using NFS, either using the guest OS, or as a shared NFS volume. Just make sure you actually pass the NFS version you want to use. In ansible, it ends up being something like:

Some notes about these NFS volumes:

After making sure the shares are there, everything runs fine…ish.

I find that - even though I have a SLOG on my pool, it’s still - at times - rather slow when doing heavy I/O. I’ll have to do something about that. While KVM is quite optimized, you’re still passing all those I/O operations through several layers extra vs on top of the hardware itself.

So, hmm. Thinking to do.

I’ve been meaning to test out Mastodon again for a while. It’s is best described as a federated version of the blue bird platform (Twitter), while not being Twitter. No ads, no algorithms.

For some obscure reason the Home Assistant folks decided to add fallback DNS functionality to the Homeassistant Supervisor. This meant that it would fall back to using Cloudflare’s DNS servers if/when the DNS servers you regularly use weren’t responding or acting weird. That was done with good intent, but it is a breach of privacy, trust and giving up a part of local control - something Home As...

In the past (before the introduction of the new design/engine/…), you were able to import Certificate Authority certificates without problems. The new version took that away, unfortunately.