I purchased a Dell XPS 13 Ultrabook, to replace my ageing Apple Macbook 2,1. After six years of daily use, it’s (over)due to retire.

The reasons for not going for another Apple product:

Extra reasons to go for the XPS 13:

The laptop arrived in a sortof-stylish black Dell box, unfortunately taped over with all kinds of deliver stickers. Oh well. 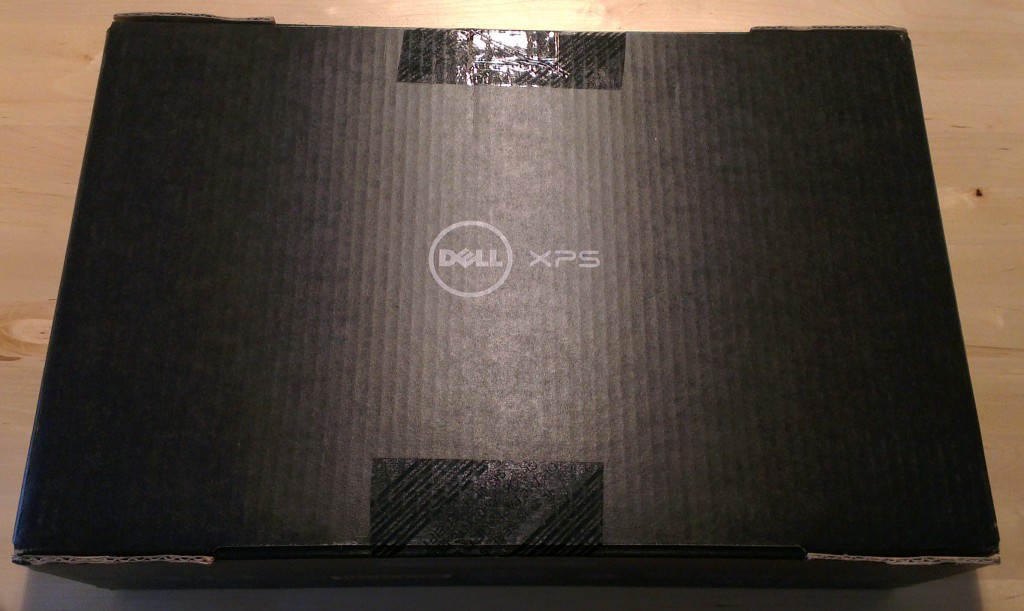 The box it was shipped in

Inside you can see the box for the power cord, and the box with the actual laptop. Nicely packaged, pluspoints here, Dell ;) 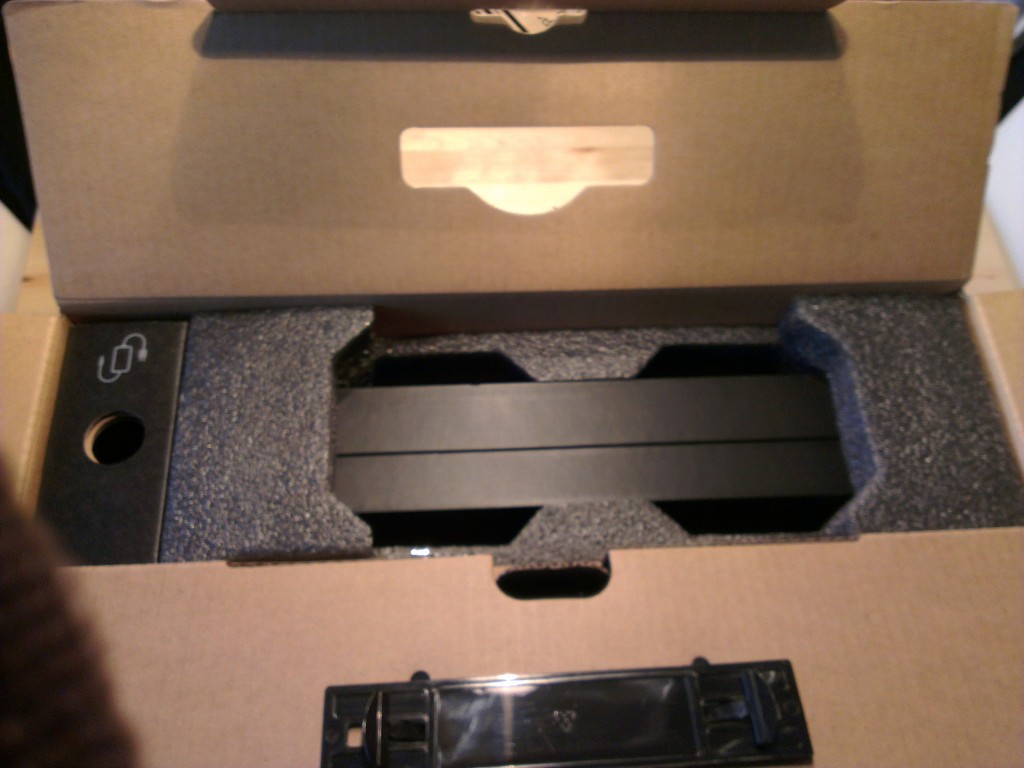 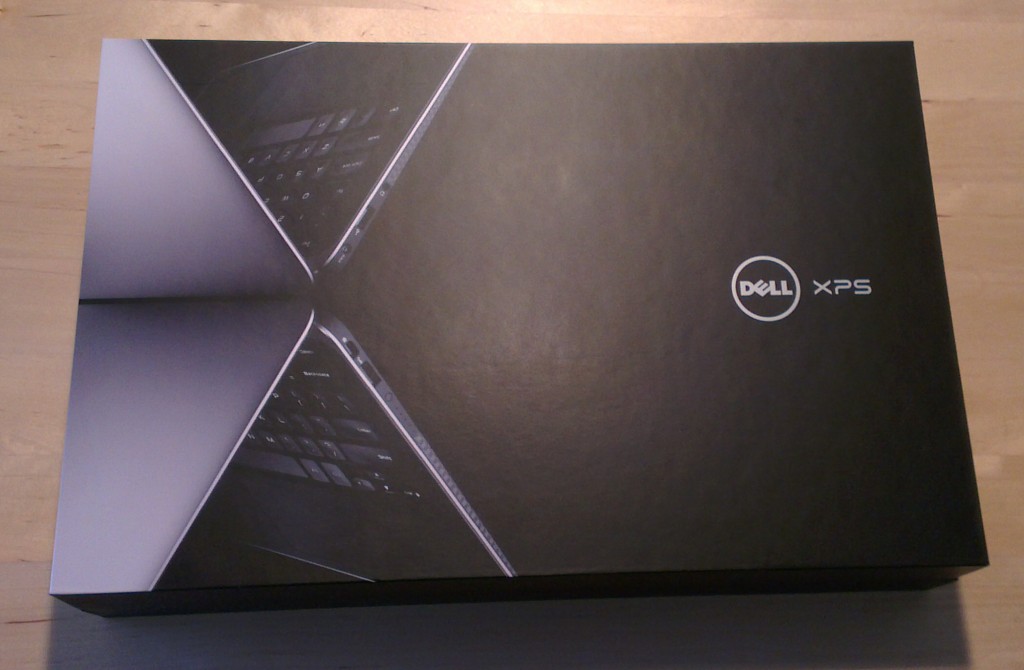 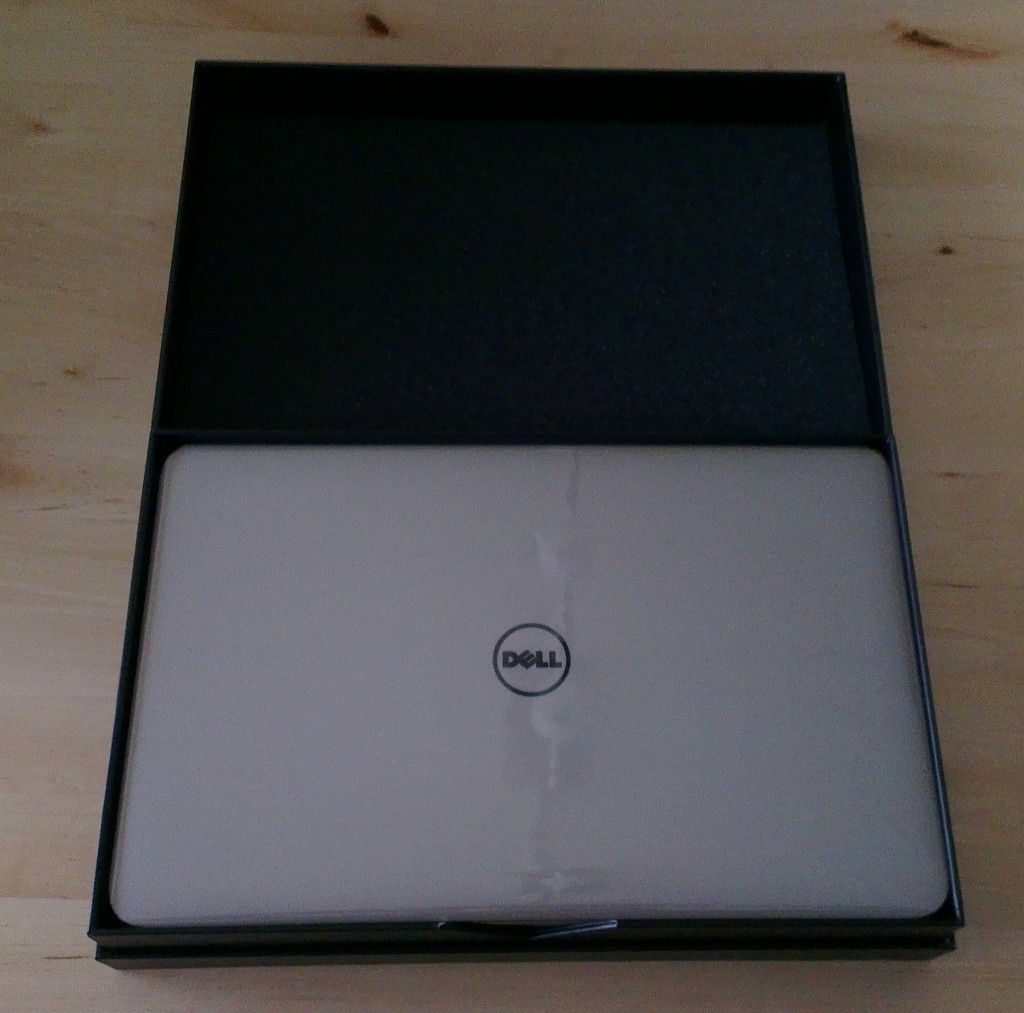 The actual laptop. Wrapped in plastic, protected with foam 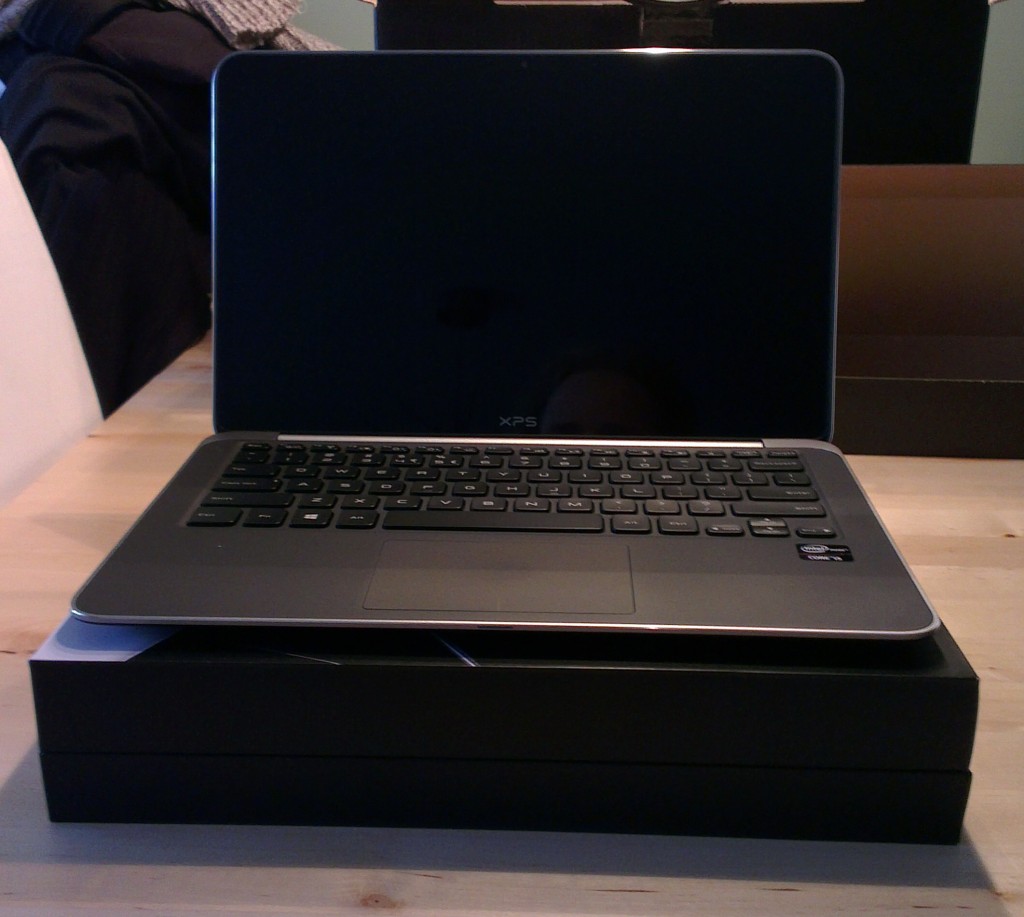 All unpacked and ready to rock!

It’s also a bit smaller than my old Macbook, although they’re both rated as being 13” laptops. 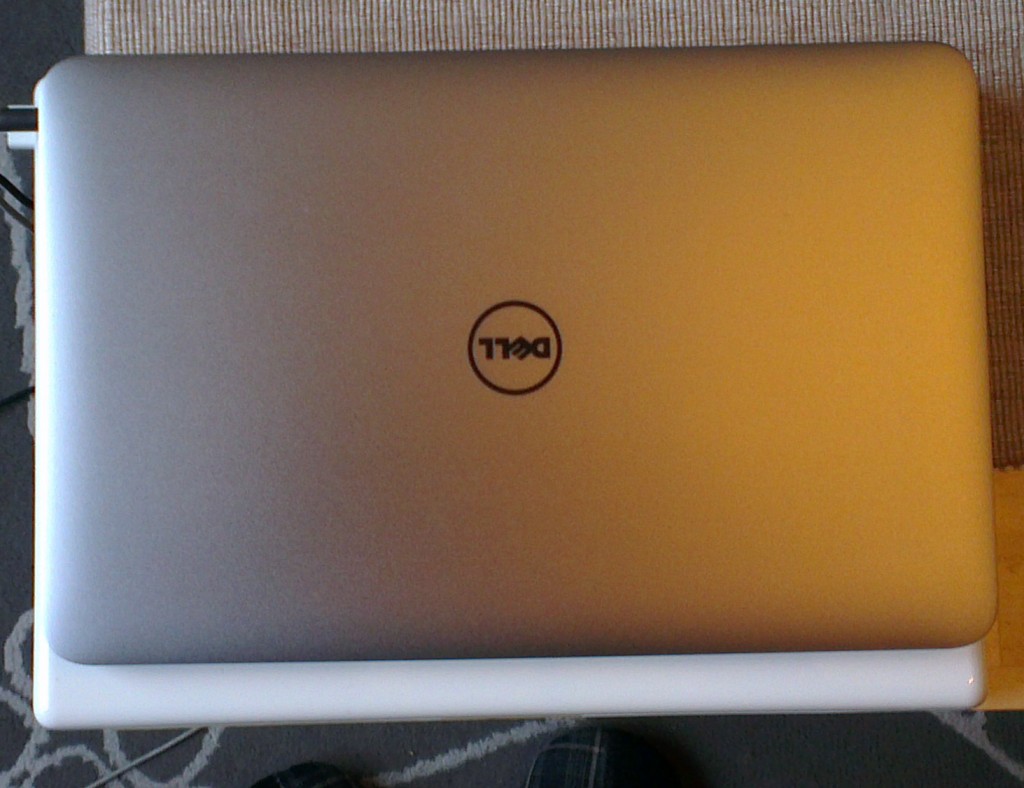 Unfortunately, the laptop I got shipped originally had some issues: plenty of backlight bleeding, and a wifi module that was broken - it would detect a wireless network for 1-2 minutes after powerup, and then nothing.
I called Dell, they sent round a technician… but after this repair, it was completely dead. So they shipped me a replacement, on which I’m typing this blog-post.

Back to the actual laptop - it’s a nice piece of hardware, but the Core i5 version comes shipped with Windows 8, unfortunately. Luckely for us, it’s easy to put something else on (or next) to it ;)
(note: the Core i7 version is the ‘developer’ version, which is shipped with Ubuntu! :D It’s called Project Sputnik)

Steps to shrink the Windows 8 partition (if you want to keep it around, otherwise you can just wipe the entire SDD. Don’t forget to first create some recovery images, though!):

A reboot later, you should be able to shrink the partition to the minimum required (I left it around 50GiB). If you don’t disable all that crap, Windows will only allow you to shrink down to around 110GiB, which is frankly ridiculous.
You can enable everything again after shrinking the partition.

This will leave us with a nice amount of storage to put Linux on.

Now, download the Debian Testing latest weekly dvd 1 for amd64. You’ll also need a USB stick of 8GiB (4.5 is needed). Format that stick as FAT32, and copy the content of the DVD image on the stick (not the actual ISO).

After this is done, you can reboot the laptop. When you see the Dell logo flash on the screen, quickly hit F12 (repeatedly). This will present you with the boot menu, where you can choose what to boot. I recommend to pick ‘Legacy mode’, and from there ‘USB storage’. Normally this will boot the Debian installer from the memory stick.

To install Debian, I refer you to the Debian Installation Manual, an excellent document that details all the steps. Just be careful not to wipe out the existing Windows partition, should you want to keep it ;)

Some time later, you’ll get to reboot the system, and Debian should be the default choice to boot with the UEFI boot manager ;)

At this point it’s also highly recommended to add unstable and experimental sources to your /etc/apt/sources.list file - the testing distribution just installed it - ahem - slightly outdated in software terms, and we’ll definitely need a new kernel.

Add this to /etc/apt/sources.list (replacing XX with your two-letter country code):

Now, to fix some of the issues I’ve encountered:

Non-functional wifi
On another laptop (or in Windows), download the firmware-iwlwifi package. Install it - a reboot later you should be able to configure the wireless interface. You might also need wpasupplicant if you use encryption on your network. (I’m lazy, so I downloaded all the packages needed for wicd and configured stuff that way.)

Laptop wakes from suspend out of the blue
I’ve encountered a few times that the machine came out of suspend without any trigger from me - highly annoying (and dangerous, should this happen while the machine is in a backpack and start to heat up). I’ve found this Bug report on Launchpad about it. The fix seems to be to disable “Smart Connect” in the BIOS. I’ve tried it here, seems to work.

Touchpad isn’t recognized as a touchpad
The patches to support the touchpad are on route to be included in kernel 3.9, but (at the time of writing) that one hasn’t been released yet. So we need to take the latest kernel available in Debian Experimental (3.8.5) and patch this with the driver. Luckely Debian has The Linux Kernel Handbook which explains how to do all this the proper Debian way ;)

First, install the necessary build packages: apt-get install build-essential fakeroot devscripts && apt-get build-dep linux-3.8
Next, get the kernel sourcecode: apt-get source linux-image-3.8-trunk-amd64 -t experimental
Download the patches too: wget 'https://patchwork.kernel.org/patch/1859901/raw/' -O /usr/src/cypress-touchpad-v7.patch and wget 'https://patchwork.kernel.org/patch/1859901/raw/' -O /usr/src/cypress-touchpad-v7.patch
Now, go to the source directory cd /usr/src/linux-3.8.5 and execute the script to rebuild the kernel with the two patches:  bash debian/bin/test-patches ../cypress-touchpad-v7.patch ../increase-struct-ps2dev-cmdbuf-to-8-bytes.patch
Now go eat a pizza, make some coffee, solve a theorem or so. It’ll take a bit. When it finishes, you’ll have another shiny kernel in /usr/src, which you can install with dpkg -i linux-image-3.8-trunk-amd64_3.8.5-1~experimental.1a~test_amd64.deb And Bob’s your uncle.

Brightness level doesn’t stick after a suspend/resume
For this I made a custom suspend-resume hook for pm-utils. Add the following script as /etc/pm.d/sleep.d/00backlight

The permanent fix is also scheduled for kernel 3.9.

Unreadable (way too tiny) fonts in applications
This is actually a drawback from having a high-resolution screen: a lot fits on it, but the fonts are tiny.
I had the issue mostly in Opera, IceDove (a rebranded Thunderbird) and XTerm, my X Terminal of choice.

In Opera you can just set the default zoom level. I put this at 120%, everything is readable now.
For Thunderbird, I can advise installing the ViewAbout extension, and then looking in View -> ViewAbout -> about:config for the setting layout.css.devPixelsPerPx, and setting this to “1.2”.
For XTerm, I added this to .Xresources (in my home directory):

so that XTerm uses the Dejavu Sans Mono truetype font, size 11, instead of the default.

This post is more a reminder for myself than anything else ;)

Orange, my ISP, supports VoLTE (Voice over LTE) and VoWiFi (Voice over WiFi) on a limited set of devices. Unfortunately, OnePlus is not one of the manufacturers.

Following up on my Exit Synology post, I’ve decided it’s time to move from a consumer grade NAS to something a bit more sturdy. I’ve also been running out of memory on the Synology NAS with all the things that I wanted to run on it… so time for something else.