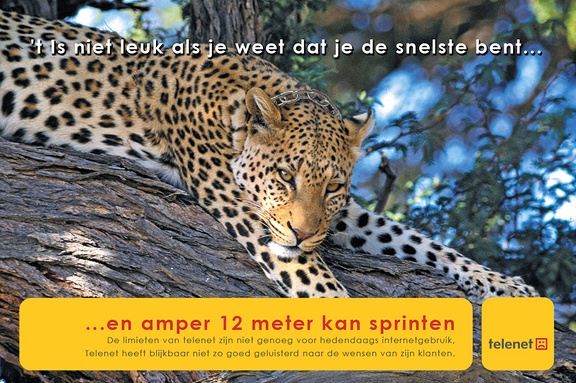 Telenet has launched a big campaign, known as Telenet drukt op de knop (Telenet pushes the button) touting that their product line would be dramatically altered. Rumours flew around like a scrapping of the limits they impose, doubling of speeds, …

In the end, it’s basically just a big non-event: they multiplied the speed of their lowest subscription by 4, going from 256kbit to 1mbit… but keeping the ultra-low limit of 400 megabytes. Yes, that’s correct, megabytes.
They also increased the upload speed of the other subscriptions.

So now these people will be able to get a lot faster on smallband (56kbit connection), or buy blocks to increase their limits… and increase Telenet’s revenues – ofcourse!

Telenet, our local cable provider, decided that analog cable radio is dead and everyone should switch to either DAB (Digital Radio over the air) or DVB-C (Digital Radio via coaxial cable). For me, that’s a bit of an issue: DAB radio is fine, but requires good reception. Our house is rather well insulated so radio reception is crap at best DVB-C radio would require buying yet another device...

I used to use Synology VPN on my NAS (in OpenVPN mode) as an entrypoint into my local network when I’m away from home. This worked fine, up to a few weeks ago - at that point I kept getting AUTH FAILED errors, even though nothing had changed.